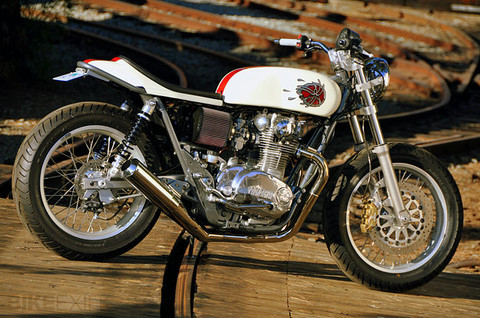 While basically an XS650, the engine has been bored to 750cc, forks are from a Buell M2 Cyclone, and the Swingarm is mid-’80's Yamaha’s Radian roadster. Helping to give the bike its unique hybrid style is an aluminum Storz café-style “bread loaf” fuel tank, originally intended for a Harley Sportster, the tank needed its tunnel heavily reworked to mate with the XS frame. Because the owner wasn’t enamored with the usual kicked-up flat-track tail, Pollock grafted a rear frame loop from a Wood-Rotax with its minimalistic, tightly drawn bodywork. Both tank and tail looking like they were destined to be together, are finished in a simple paint scheme, a pearl-white and maroon take on the old Yamaha racing colors. Artwork on the gas tank is the company’s classic tuning-fork logo as envisaged by Salvador Dali. A fabulous looking bike and far less than a third the replacement value.