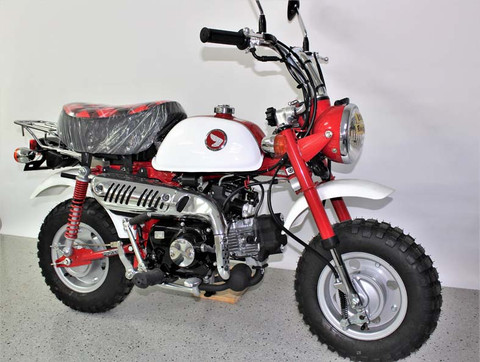 Early 2017 Honda announced that at the end of August, the world’s most famous 50cc minibike will finish its 50-year production run. In recognition of this incredible production Honda produced a final 50th anniversary special edition.

Chiaki Kato, president of Honda’s motorcycle department, confirmed the Monkey’s demise was yet another product the world wants, but the cardigans in Brussels signed its death warrant due to their draconian Euro emissions standards that Japan would have to adopt if they wanted to play in the big league. Kato-san added that even if they were to engineer the motor to compliance, stricter laws will go into effect in Japan in 2021, and as such, it was decided that it would be best to end the diminutive icon now. “As it is a milestone of 50 years,” Kato-san said, “we will end production and sales tearfully.”

This 50th anniversary Monkey is available in brand new condition, and has never had fuel in the tank. Located here in Coffs Harbour the bike is sold with all original books, battery and spare keys.

Follow this link for hi-res pics of the 50th anniversary Monkey.