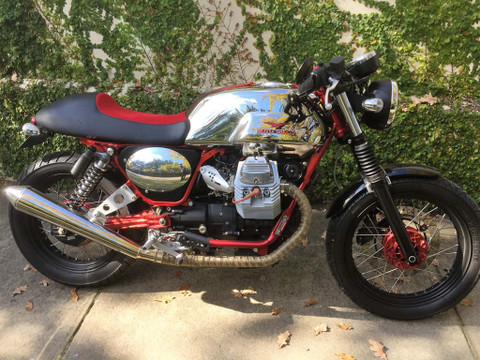 In 1967 the world received the first every large capacity Italian bike: the Moto Guzzi V7. Brainchild of Giulio Cesare Carcano, the V7 made its debut with a 2-clylinder 90° V-twin, but unlike any before, the V mounted across the frame. The 703cc engine was ground-braking for the time, and the model was an immediate success with press and public alike. The V7 is the bike that established Moto Guzzi’s name throughout the world, as a producer of prestigious, comfortable, elegant motorcycles.

Forty years later, the V7’s heritage was the inspiration behind creation of the new V7 Classic range. A bike with a strong character, obvious ancestral beauty to the original V7, but benefiting from today’s modern technology & significantly more reliable electronics. A decade after the V7 classic was released, Moto Guzzi decided it was time to pay homage to their most successful sports bike, the V7 Sport.

Moto Guzzi has captured the essence of that magical moment in time from over three decades ago, and reinterpreted it with the marque’s hallmark passion and skill to create a genuine production special: the V7 Racer. Produced in a numbered edition, each with its own commemorative plaque on the steering yoke, the V7 Racer celebrates the classic styling cues of the Moto Guzzi brand in a perfectly balanced blend of craftsmanship and technology evident in every aspect of this stunning motorcycle.

This particular example is a 2012 build, first registered 2013, and has been tastefully enhanced with high-end custom parts that result in a subtle eloquence of design priority. With only 2,600k’s of use, this beautiful V7 Racer is virtually new.