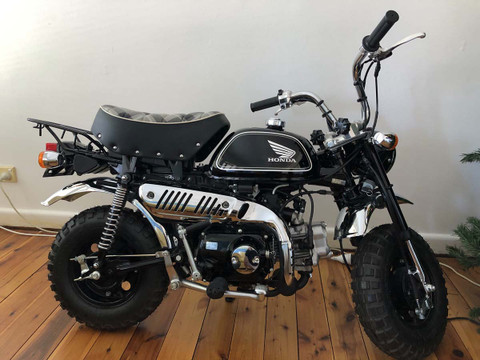 In 1979 Honda introduced an up-spec racing version, the Z50R, which received a new overhead cam engine capable of more power than the overhead valve unit found on all previous models. The Z50R featured greatly improved front and rear suspension, a more traditionally shaped fuel tank, flatter seat, and a left-side exhaust. The only colour available for the first couple of years was “Tahitian Red” and it was fitted with a single carburettor and a 3-speed gearbox. The Z50R would remain in production from 1979 till 1999, by which time it had evolved into a fully-fledged mini-motocross bike.

This Z50R has been part of an extensive Z50 collection located in Sydney, Australia, and as the pic suggest, has been retained in showroom original condition.