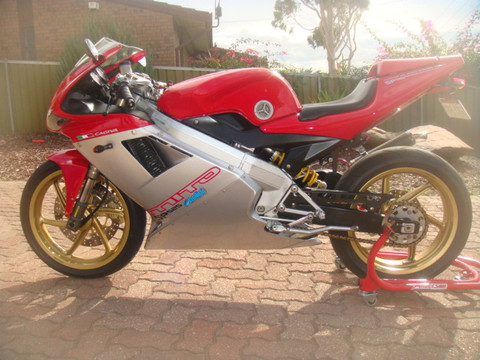 Cagiva is one of the few manufacturers that have invested considerable time, money and resources in developing the two-stroke technology. Once known as an engine design that would develop incredible power but at significant cost to the environment, Cagiva’s hard work has placed that sort of criticism into the history books.

Cagiva’s integrated ECS (Electronic Carburetion System) administers exactly the right amount of fuel (both the air/petrol and oil mix) at precisely the right throttle opening relative to wheel speed and gear selected. A development collaboration with Dell’Orto, the control unit also governs the ignition timing and advance curve. The outcome was a highly intelligent ECU produced at a cost which kept the Mito competitive, while at the same time meeting the stringent Euro 3 emissions standards without compromising all the advantages on offer by two-stroke engines i.e., lightness, performance and low running costs.

Only a handful of these beautiful little pocket rockets were imported into Oz by Paul Feeney, the MV Augusta agent at the time. In their OEM spec these bikes are LAMS legal and with a few mods you end up with something like example, that weighs only 115kg’s, and thanks to a host of upgrades (see below) produces +38HP; dyno printout to support this claim. The bike runs like an Italian sewing machine and with the right rider will frighten many larger capacity sports bikes.