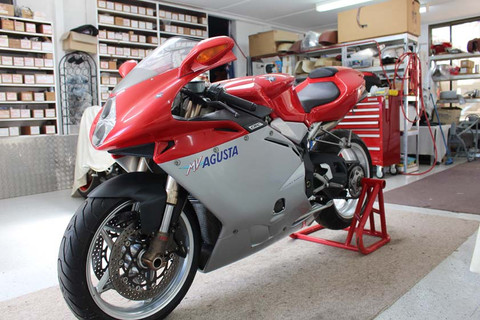 Cloned from the awe-inspiring F4 Serie Oro, the S version is enriched by the initials EVO3 which indicate the Model Year and the presence of the Evolution engine. Available in the commemorative chromatic red and silver, or luminous "Diamond", the F4S was produced as both a single or double seater, the latter identified as 1+1.   The 1+1 version was highly sought after due MV managing to design the pillion seat without compromising the monoposto’s beautiful lines and trademark stylistic flow of the spectacular arrow type exhaust and tail end. In achieving this objective, the passenger seat is the same colour as the bodywork, while the footrests are designed to integrate themselves perfectly within the extraordinary F4 lines.

This beautiful example is a genuine 2 owner, Australian delivered model and travelled only 8,400k’s from new. Bike is sold with all the MV Handbooks, and signature cover.  In preparation for selling the bike has been fully serviced and fitted with new tyres.

Modifications for 03 EVO S are aluminium silver coloured wheels from the SPR, Clutch & sprocket cover painted in MV AGUSTA grey, tachometer has a yellow background & "F4" logo, and a Tricolore logo placed on the steering head.