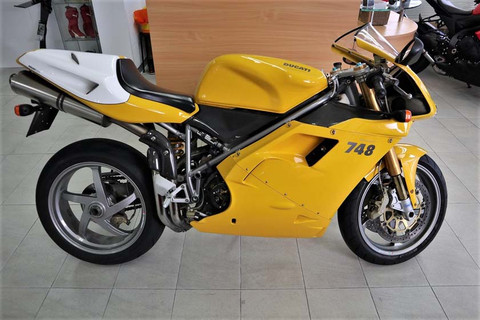 The Ducati 748 was built from 1994-2002 and sold in 3 build specs; E, S, and R (WSS factory racers identified as SP or SPS). The E was a biposto, the S a base model with upgraded components, but the R was a monoposto only homologation special for WSS (World SuperSport) racing.

Under WSS rules, manufacturers had to race what they sold, so the 748R was fitted with everything the factory team wanted to contest the WSS Championship. Those special bits included the frame, engine, suspension, airbox, and slipper clutch. The 748R has a much different engine than the base or S, 106hp thanks to high-lift cams, titanium connecting rods and valves, and fuel injectors centred in the 54 mm intake stacks. The frame was lightened and altered to accommodate the larger carbon fibre airbox, suspension uprated to fully adjustable 43mm Öhlins up front, and Öhlins 2-way rear shock, and cast Marchesini 5 spoke wheels. When released the 748's were reviewed as diminutive knife-sharp handlers, and though the -S was said to be better for the road than the 996, the 748R may be better suited to the track.

This example is # 253 of the 1000 built, and presents in lovely almost original condition with only 5,600k’s use from new. Non-oem changes amount to Ducati Performance carbon chain guard, clutch cover, inlet snorkels, and DPO clutch. The original snorkels are to be replaced before selling, and the oem clutch cover is supplied in the sale. Photos of verification letter from Ducati Bologna confirming this as a genuine R, the bike was Australian delivered and has had only 2 previous owners.  The bike has been fully serviced including belts & clearances, and has done zero kilometers since this comprehensive service.