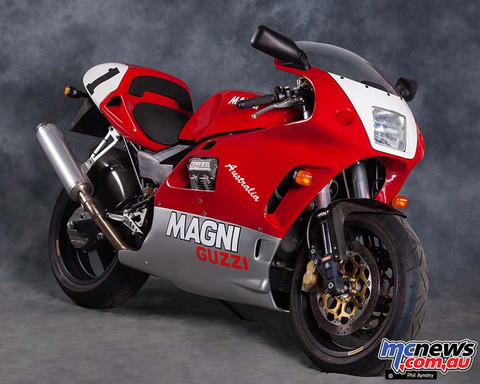 Arturo Magni joined the MV Agusta race department in 1950 and was head of MV’s glory days until the factory withdrew from racing in 1977. From there the Magni name escalated in substance after Arturo and his sons opened Magni Racing, predominately modifying road-going MVs with new frames, chain final drive and bodywork. However, realising the limits of working on with a small manufacturer (sales numbers) Arturo turned the families attention to other marques, starting first with Honda, then BMWs and finally, in 1985, Moto Guzzi.

Arturo’s first effort with Guzzi was the 1985 Le Mans, using his own frame and rear parallelogrammo swing-arm & monoshock suspension that eliminated the shaft drive reactions inherent in that design. For 1987, there were the retro-look Classico and Arturo 1000s, and in 1989 the Sfida 1000. In 1990 Magni built a "V-twins class” Daytona 4-valve road racer using contemporary technology, one of which Australian Moto Guzzi importer, Ted Stolarski, acquired and entered for WA road racer Owen Cole. Cole & Stolarski took the Magni Daytona to numerous victories and in 1993 Magni paid homage to the Australian’s efforts by producing a limited production of 75 Magni Australia’s using the new 4 valve Daytona engine. Such was the success of this production model, that in 1998 an even smaller production of 50 Australia’s were produced, using a higher spec 4-valve Daytona engine that produced 102hp and improved throttle control thanks to the Weber-Marelli fuel injection; the model had a revised chassis & increased steering head angle (24°), the model was re-named the Australia 98.

This spectacular example is one of those last 50 RS powered 98’s and has been part of a well-known private collection based in Melbourne, Victoria. This bike was photographed by renown motorcycle photographer Phil Aynsley and centred in a 2016 MCN feature editorial about the model. Notably, the tail seat cowl has been personally signed by Arturo and Giovanni Magni prior to the great man’s passing.

The last recorded sale of one of these extremely rare bikes was in the Jan 2016 Bonhams Las Vegas auction, where a similar quality example sold for $25,300USD (circa $42,000AUD landed)

Click this link for high res images of this beautiful motorcycle

International buyers please note: Raider Moto has a dedicated shipping service and can transport this bike to your door by sea or air.

All prices are in EUR.