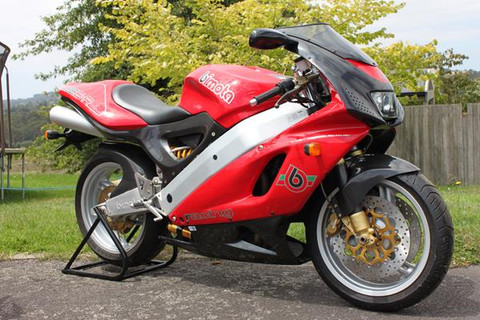 The SB6R followed Bimota's traditional route of taking a powerful Japanese engine from an ill-handling chassis and putting it in a better one. Mainstream Japanese sportsters mostly handled very well from the early 1990’s onwards, but the 1993 Suzuki GSX-R1100 was rather overweight. Bimota took one of the world's most powerful, liquid-cooled 1074cc engine and around it built an exotic aluminium beam chassis. The best wheels, suspension and brake components were bolted on, and the whole lot was swathed in gorgeous single-seat bodywork, with a stunning under-seat exhaust system. The Paioli forks, Öhlins shock and Brembo brakes provide excellent handling. Only 600 of the high-spec R model were ever produced and at around 35,000 USD ownership was pretty much confined to the corporate world and serious collector enthusiasts.

As the heading suggests, this beautiful Australian delivered example is absolutely 100% showroom new. The bike was collected from the local distributor as it arrive from Italy, uncrated and placed in the owner’ office where it still resides today. The engine has been turned over every month but asides of the factory’s bench running, the bike has never been ridden or run since arrival.

This bike is ideal for serious collectors or a museum. We have our own export/importing service so international buyers will face no difficulty in acquiring this beautiful bike.