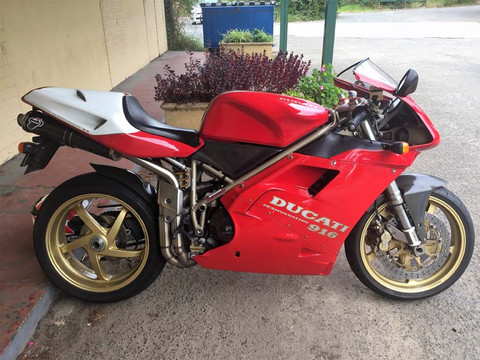 The bike that changed the face of Sportsbike design forever, the Ducati 916 is regularly referred to as one of the most beautiful motorcycles ever built.

Designed by Massimo Tamburini & his brilliant team at the Cagiva Research Centre, the 916 would provide the platform for Ducati to decimate the World Superbike Championship from 1994 until the end of its production in 2001 in 996 guise. In 2002 the Testastretta 998 engine was introduced but chassis & aesthetics remained virtually unchanged. Despite its aging design the model continued to dominate in WSBK and domestic championships around the world throughout its production and up until 2004.

Of all 1994 production, the most sought-after are the very small production run built at the Varese factory by Cagiva, after a fire in the Bologna paint shop closed the 916 factory line. The Varese bikes were all 13 character VINs, and had many higher-spec items, like Pankl con-rods, the programmable P8 ECU from earlier SP5 race bike, and an assortment of definable items not fitted to the Bologna bikes, most of which were stamped or embossed with the Cagiva logo, whereas the Bologna bike were stamped with Ducati logos.

This example is a Varese model and presents in excellent condition. Like almost all Varese 916’s, this bike was delivered new in Italy, then imported to Japan and then in 2011 imported to Australia and underwent ADR compliance. The bike is presently registered in NSW and has travelled a fraction over 20,000k’s.

Fortunately, the owners have retained all of the original OEM parts that have been replaced with more expensive or higher spec items. In most cases these parts are lost as owners personalised their bikes and/or made them more race orientated, without thinking about future values or realising their bike will one day be considered a collectible investment - Bikes in OEM condition command the highest values.

In readiness for selling the owner has had the bike fully serviced, new belts, fuel/oil/air filters and new battery.

Validated in writing by Ducati Spa as a genuine 1994 mono-posto, this model is a definite collector for any Ducatisti, or motorcycle enthusiast and serious collector. Click on the link below to see high-res pics of this bike.