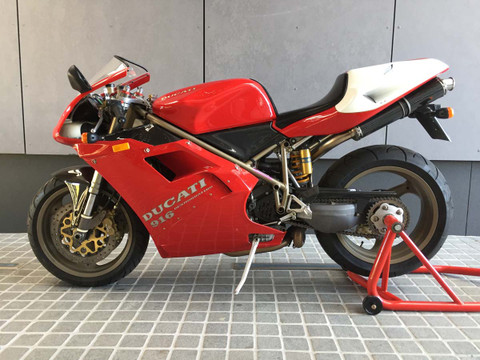 The 1994 Ducati 916 is often referred to as the “Modern Greenframe”, and rightly so as this model changed forever the direction of Ducati as much as the 1974 750 Super Sport, aka Greenframe. Fate has always played a cruel hand to the tiny Bologna company, and in 1994 nothing much had changed. Saved from extinction by the irrepressible Castiglioni brothers, their first task was to commission the Michelangelo of motorbike design, Massimo Tamburini, to pencil Ducati’s ‘next generation’ of motorcycle. Released to the world at the 1993 Milan Motor show, the 916 was literally an overnight sensation. With unprecedented orders flooding-in fate dealt its hand yet again, with a fire in the Bologna paint shop which shut down production.

In a bid to continue building the most important motorcycle in Ducati's history, manufacturing was relocated to the Cagiva-owned MV Agusta factory in the city of Varese. Here, approximately 2,663 Ducati 916’s were assembled (predominantly by hand) to keep both the dream & Ducati alive. The Bologna factory returned online in 1995, and production continued through-out the model’s incredible decade of dominance in sales and racing.

Whilst astute collectors recognised the 916’s potential early-on, only true Ducatista knew of the scarcity and importance of the Varese built examples, and today these 2,663 916 and 916SP’s are considered the ‘Holy Grail’ for enthusiasts & collectors alike.

This particular Varese example was delivered new in the US and it’s first two owners amassed only 10,000 miles before it was purchased as an art piece for a Santa Fe Architecture Firm.

Of significance, the second owner kept a meticulous hand-written diary of ownership, recording even the most minute detail. The bike was delivered new with Ohlin’s rear shock, and was later upgraded with a range of high-end Ducati performance and premium quality accessory, each recorded in the diary while the original parts were carefully packaged for safe-keeping. NOTE: All OEM parts can be replaced if the buyer wishes to return this to perfect original condition, including the factory garage stand.