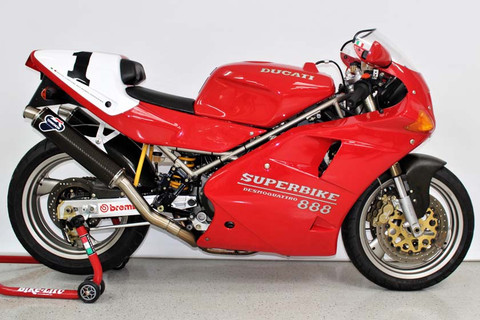 In the Ducati Sport Production 'department' two models were available in 1992: the 851 SP4 and the 888 Sport Production Special (SPS). The 888 SPS was the ultimate racer, available in 1992 with larger valves, higher valve lift, racing cooling system and carbon fibre Termignoni exhausts. The 888 SPS was almost an 888 Corsa racing bike with lights and mirrors. Ducati won the 1992 Superbike Championship with Doug Polen, but a new talent was recruited, Carl Fogarty who joined the Ducati factory Corse team towards the end of 1992.

For 1993 Ducati was preparing for a move that would change the company forever; Fogarty, working together with Massimo Tamburini, the factory developed a completely new bike for 1993 as it would be the final year for the 851 - 888 Strada range. Although aesthetically the same as the 1992 Strada, the engine displaced the extra 37cc, but the final Sport Production model, the 888 SP5, was mostly based on the 888 SPS and received its high performance engine, but with the SP4 cooling system, Showa front forks and bronze Brembo wheels. Both the 888 SPS and SP5 are extremely rare and among the best machines money could buy in their day.

In the realm of WSB Homologation bikes, you don’t get much better than the Ducati 888 SP5. This beautiful machine was supplied new in the UK and travelled less than 3,000 miles from new. Formally owned by renowned Ducatisti, Jack Gratton, this is number 48 of the five hundred SP5's built for WSB homologation purposes.  The bike has been on permanent display since 2007 and in preparation for selling Raidermoto.com has given it a full service, new belts, battery, filters, and fluids.   Supplied with its UK V5C registration and old MoT test certificates documents, this is a rare opportunity to own a Ducati made famous by one of World Superbike’s superstars, Carl Fogarty.

To see hi-res images & video of this bike click the link below.