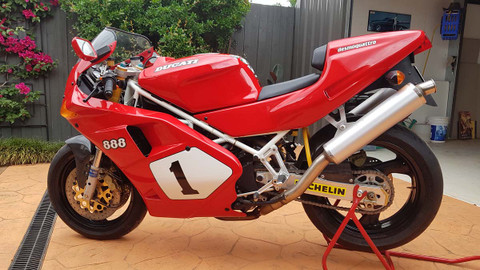 Ducati reinvented itself in 1987, thanks largely to the Castiglioni brothers who had purchased the struggling company two years earlier. With fresh cash & boundless passion, the Castiglioni’s gave free reign to legendary engineer, Massimo Bordi, to fully exploit what he believed was the future of Ducati, a 90° v-twin liquid cooled 4-valve engine. Bodi had designed the concept in 1973 and had continuously developed his ideas through the years to include one of the world’s first fuel injection systems and programable computer to manage both fuel and ignition (ECU).

The 1987 851 Tricolore was the rebirth of Ducati and release of its new flagship model, and while it was immediately competitive on the world stage, the 851 took a couple of seasons to develop and by 1990 when Raymond Roche secured the first of Ducati’s 14 victories in the World Superbike Championship, the model was securely intrenched as a collectible.

Mid 1990 the 851 SP2 was introduced with many race-orientated improvements including an engine increase to 888cc. In 1991 the SP2 was upgraded to SP3 and with over 130hp in ‘Corsa’ spec, American Doug Polen would be first to greet the chequered flag a record 17 times aboard his 851 SP3 to secure the 1991 WSBK Championship. With the 888cc engine now reliably developed in racing, for 1992 Ducati would officially re-badge the 851 as the 888, and Doug Polen would reward the new model with another WSBK crown aboard his 888 SP4.

Only 500 SP4’s were ever produced, and only 6 were ever sold new in Australia. The official Australian distributor, Fraser’s Motorcycles, imported the 6 SP4’s in two batches; the first consignment of 2 bikes arrived March 1992, while the second consignment arrived two months later in April. This particular SP4, build number 210, was one of the second consignment and sold by Melbourne Ducati dealer, Moto Italiano. Purchased new by its current owner, the original invoice, first registration, and all service receipts and paperwork associated with the bike and its 27-year ownership has been retained and will be included with the sale.

At the request of Moto Italiano, this bike was displayed in the 1992 Dandenong & Southern Districts American, British & European Motorcycle Show, for which it was awarded best “European”. Over the next 27 years the bike would see limited use, with total use only 12,237k’s. This is a spectacularly original example of a very rare motorcycle that has been meticulously maintained and loved from purchase to present.

IMPORTANT!! Advertised price may include shipping concessions and/or be subject to currency exchange rate fluctuation – please contact RaiderMoto.com to confirm the location of this item and establish the price relative to the current exchange-rate.