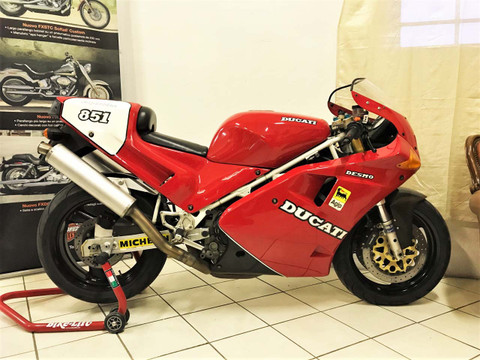 Introduced in 1987, the 851 range is regarded as the model that saved Ducati from extinction. Successor to the traditional air-cooled two-valve 900SS, the tiny factory’s previous dedication to technological development had become almost stagnate due to continued funding shortages from having State ownership. However, with arrival of Claudio Castiglioni, new investment from his Cagiva budget gave the green light to a significant boost to R&D, Massimo Bordi wasted no time in developing his water-cooled 4-V cylinder head project. Bordi had used the 4-V concept in 1973 for his thesis at the University of Bologna, and with Cagiva funding his updated ideas came into production as the Desmoquattro.

Based on the Pantah motor but with liquid cooling, fuel injection, and those beautiful desmodromic four valve heads, the 851 made Ducati once again competitive in motorcycle racing. First with the 1987/8 Tricolore ‘Kit’, then 1989 saw the very first SBK homologation SP model, the 851SP; 1990 was the SP2 which introduced the first 888cc engine and later that same year early examples of the SP3 entered the market & race tracks. Most SP3’s were sold during 1991 and the following year saw the SP4, and the final homologation special, the 888 SP5 were sold during 1993/4.

This particular example is SP3 # 518, frame 369, engine 869, and has had only 2 owners in its 29 years. The absolute majority of its 42,000 k’s was performed under the first owner as the current owner is a well-known Italian collector and this beautiful SP3 has sat in a sizable collection and undergone annual servicing irrespective of not being ridden. An absolute beautiful example in completely original condition. The advertised price includes shipping & arrival costs in to Sydney.

For further information, shipping, price or provenance inquiry, please contact Ian at Ian@raidermoto.com or call RaiderMoto.com during office hours on +61 2 66512405, or find us on Facebook RaiderMoto.com