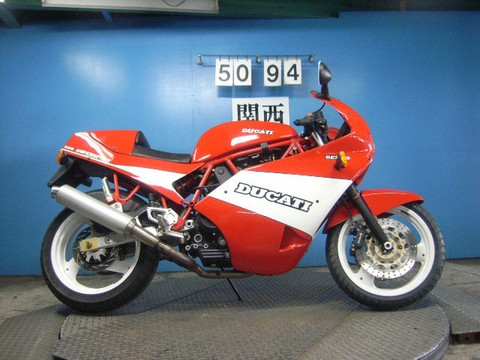 Ducati's post bevel Supersport era started with this bike, the 1988 designed, 89-90 production of the worlds first 900cc belt drive Supersport. The significance of this bike in Ducati history can not be overstated. Its design ushered in styling for the world championship winning 851 series, and it's engine , engineering, frame & suspension paved the way for all the Supersport models that followed.

Very few of these models were ever released in 89, and the entire 1990 production was quite low as the factory struggled with the enormous funding required to transform its entire operation from 70's bevel to 90's belt. Owing to its relatively brief production span and numbers, collectors & non-Ducatisti have been largely oblivious to its existence, factors that almost guarantee it's investment value. By comparison, the 600 & 650 Pantah's produced prior, are now commanding $16 - 18k and rising, so it's not rocket science to workout where this model is headed.

This spectacular example is a time machine, pristine original and virtually new with only 234k's use in 27 years!! This bike is definitely one for the 'pool room'!!