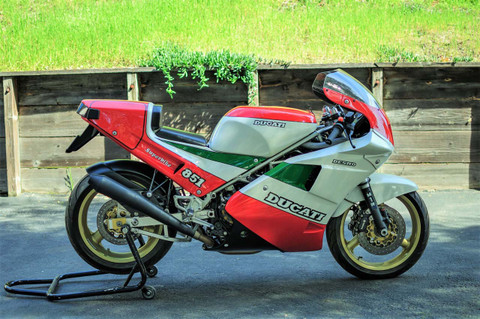 In the late 80’s Ducati was a relatively minor manufacturer compared to its Japanese rivals, and as a consequence when the baby Bologna company decided to enter the new World Superbikes Championship, they were required to build only 200 homologation versions of the factories first water-cooled 4 valve superbike, the 851 Tricolore. The homologation special was aptly name KIT, as it was a combination of various racing parts added to the basic street bike; it was certainly the only racing bike that came from the factory with Michelin racing slick tyres, electric start, headlight and taillight. With a qualification number of 200, 207 Kit specials were produced, 54 of which went direct to the USA for the AMA Championship.

Compared to any other twin on the market in 1988 the 851 Strada was ground-breaking. It was the only motorcycle with an open-loop fully-mapped electronic fuel injection system. The Weber Marelli IAW system was originally developed for the Ferrari F40 sports car and Formula One and incorporated a computer with an EPROM (electronically programmable read only memory). This contained a map of fuel and ignition requirements derived from dyno tests. Although the first 851 Strada only produced a modest 102 horsepower at 9,000 rpm this was considerably more than any other twin available in 1988.

When it came to the frame and suspension Ducati continued its tradition of evolution of existing designs. The frame was based on the 750 F1, but with a rising-rate rear end and the 16-inch Marvic/Akront composite wheels (aluminium rims with magnesium spokes) from the limited edition 750 Montjuich. As it was a limited production item many of the components were individually crafted, including the 20-litre aluminium fuel tank and rear-suspension rocker linkage. At the first World Superbike race (Donington 3 April 1988) Marco Lucchinelli rode the factory 851 to overall victory; it was the beginning of nearly twenty years of Desmo domination.

This particular example is located in California and was purchased from a well known New York based collector. Records show had been fully serviced circa 2014 and remained unused or ridden whilst part of the collection. In researching the bikes history, it seems this was an early production German delivered Kit, supported by the fact it has painted reverse-cone racing pipes (as opposed to black chrome) and while there’s no record of it being raced, almost all Kit bikes did find their way to the track. Importantly, it still retains the original seat pad with renown manufacturing defect that only appeared on the 207 Kit bikes. Only detraction's to being perfectly original are the very high quality carbon-fiber air intakes, airbox modifications and non-oem steering dampener.

This is a very rare motorcycle and a beautiful piece of Ducati’s modern 4V history; the advertised price includes shipping & arrival charges into Sydney.

Note: With thanks to Ian Falloon for much of the detailed information above in relation to the 851 Kit model.