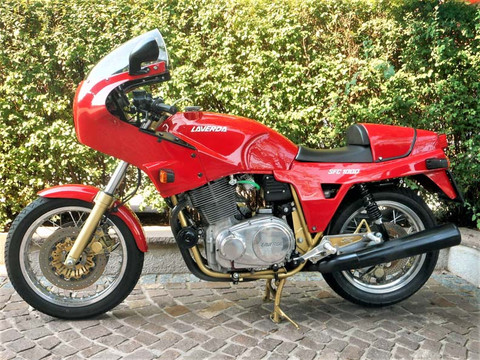 Laverda’s popularity and owes everything to its 750SFC racer which dominated European endurance racing in the early 1970s. When the twin cylinder 750 started to struggle Laverda stunned the opposition a fire-breathing 180-degree 1000cc Jota triple, that was to sustain the orange magic. However, despite endless refinement by the 80s not even the roguish exhaust note or the rush of top-end power could disguise the 180’s excessive vibration, a side-effect the two outside pistons rising and falling together. In a bid to overcome this issue a more orthodox 120-degree crank was introduced, but this created a completely new character.

In 1984 a limited edition SFC 1000 was released and packed with special features. A hand assembled engine with forged 10.5:1 pistons (from the factory F1 racer), 40.6mm inlet valves and 34mm exhausts, it produced 69.9kW (95hp) at 8000rpm, and a Formula One racing kit was optional and included P1 (Prova 1) camshafts, 36mm carburettors and a close-ratio transmission.

In 1987 a final batch of 100 SFC1000’s were produced specifically for the German market. These were black or red and fitted with wire-spoked wheels; they were the last triples ever produced in the Breganze factory. The example offered here is one of those last 100 bikes, first registered in Germany on 1987 and has had only one previous owner. The bike is spectacularly original, is sold with original documents and presently located with its German owner. The advertised price excludes shipping & arrival charges.

Follow this link for hi-res pics of this SFC.