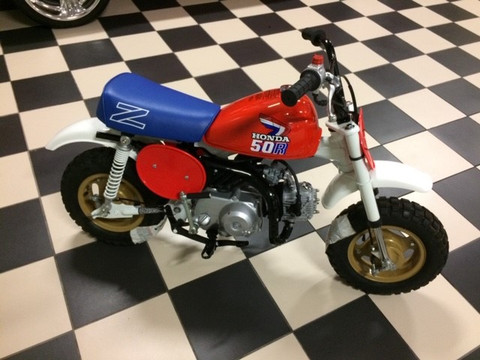 In 1979 Honda introduced an up-spec racing version, the Z50R, which received a new overhead cam engine capable of more power than the overhead valve unit found on all previous models. The Z50R featured greatly improved front and rear suspension, a more traditionally shaped fuel tank, flatter seat, and a left-side exhaust. The only colour available for the first couple of years was “Tahitian Red” and it was fitted with a single carburettor and a 3-speed gearbox. The Z50R would remain in production from 1979 till 1999, by which time it had evolved into a fully-fledged mini-motocross bike.

This Z50R has been part of an extensive Z50 collection located in Sydney, Australia, and as the pic suggest, has been retained in showroom original condition.

Click on the link below to hi-res images of this bike.

For further information, shipping, price or provenance inquiry, please contact RaiderMoto.com during office hours on +61 2 66512405, Email mybike@raidermoto.com, or find us on Facebook RaiderMoto.com