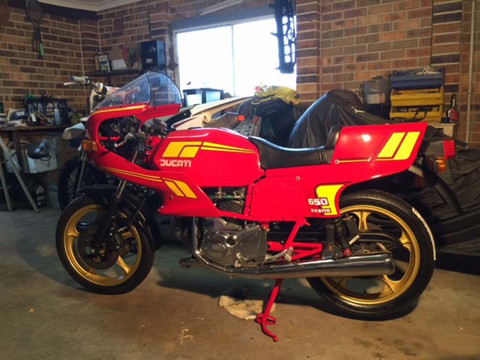 The 650 Pantah was built specifically to homologate the TT1 750 racer’s new engine which used a 61.5 mm stroke. Instead of producing a production 750 road bike, the 650SL was created with an 82mm bore and the required 61.5mm stroke, thus complying to the governing bodies homologation requirements. The 650’s bodywork is virtually identical to the 600, but it was painted in the now famous TT2 colour scheme of red and yellow. Other minor differences were a different instrument layout and some other cosmetic minor changes, but it had far more torque, and that was a big improvement. Only 288 650SL’s were ever produced; enthusiasts and collectors alike have doubled the 650’s value over the past half a decade alone, actions that have cemented this model’s security as being a sound investment for the future.

As the pictures show, this example has undergone a full rebuild and restoration with invoices and receipts for a total cost that exceeds the asking price.

In the coming weeks this bike is destined to be shipped to the US but the owner is willing to sell provided he achieves the noted asking price. That price is slightly above the Australian market atm, but Australian values are lagging well behind the rest of the world, and in the years ahead this will have proven good buying given there is absolutely nothing to spend; best money buys best bikes.