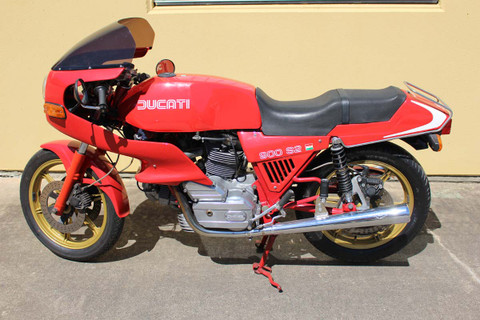 The 900 S2 was introduced in 1983 to replace the 900SS. Buyers of the first model were offered a choice of electric or kick start, but not both, but most of those found surviving today sport the electric leg. The 84 S2 and MHR Mk4 were virtually identical in frame and engine, and both received the much needed upgraded gearbox which finally put an end those ongoing gearbox gremlins which afflicted many SS’s. The S2 and MHR were the last ever 900ss Bevel Ducati’s to be produced.

This patina perfect example is Australian delivered, had only 2 previous owners, and travelled only a fraction over 4,000k’s from new. The majority of S2’s were painted black/orange, making this red/white example extremely rare. A search on-line will reveal very rough S2’s selling for 20 to 25k USD, making this spectacularly original example fantastic value. This bike is unmolested with exception to removal of its oem air filters which decimated mid-range performance and acceleration.