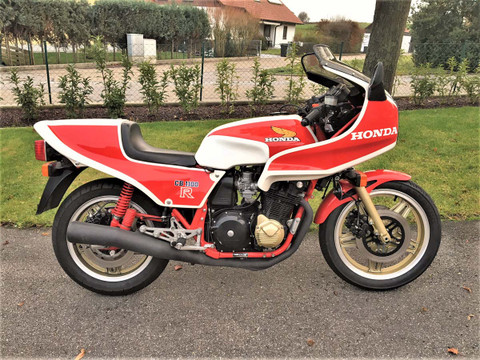 There no disputing the fact that Australia was a major player in direction and development of Superbikes. Australians were not afraid of large capacity bikes that had far more power than handling & brakes; anything with more power was taken from dealership to race track, namely Amaroo Park, where the Castrol Six Hour Endurance race had become one of the most hotly watched and contested showrooms for manufacturers, and none more so than those from Japan.

Honda had made a global splash with its game-changing CB750, but in the years following it had become a distant place-getter in the wake of Kawasaki Z1/900, BMW R90/R100, and the Yamaha XS1100. Just when the new CB900 looked like it might overturn things, along came Suzuki’s GS1000 and followed soon after by the GSX1100. One thing Honda has never done is things by half measures; before HRC was created, Honda’s black Ops was called RSC (Racing Service Center), and in 1980 Soichiro Honda instructed RSC to build something that would win the Castrol 6hr. It was one of his open-cheque book initiatives and the outcome was a limited built of 100 CB1100R production Superbikes. Whilst the first 100 were all destined for racing, the model was released to the public the following year but only 1,050 were constructed for global distribution.

To comply with Australian racing regulations, which banned aero bodywork, the first batch of CB1100R B’s were manufactured in naked form, but for the rest for the world, the production B received a half fairing. The example offered here is a 1981 German delivered CB1100R B, that has enjoyed only 3 owners from new and traveled just under 30,000k's.  A beautiful patina perfect bike the only non-original part is the extremely rare ECKERT 4 into 1 exhaust system. The advertised price includes shipping & arrival into Sydney.

Click on the link below to high res images.