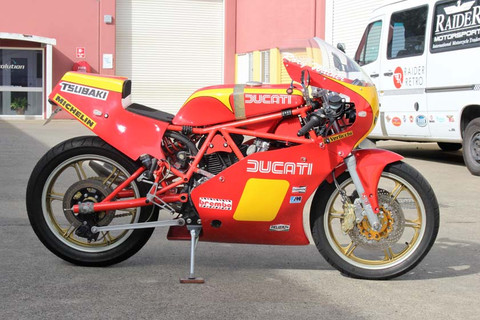 As a racing machine, the famed Fabio Taglioni, aka ‘Dr. T’, designed TT2 was an exercise in absolute minimalism. The chrome-moly trellis frame weighed only 7kg, yet the TT2 was considered the most stable, predicable handling bike of the era. With a completed kerb weight of only 148kg it included a full charging system, instruments, and lead-acid battery large enough to operate the oem electric starter motor. All of these items were required under the Italian racing championship regulations, a class that mirrored the FIM F2 world championship rules, and the category for which the bike was ultimately created for, and subsequently won. In its debut year the tiny TT2 won the both Riders and Manufacturer’s Titles in the World F2 Championship with Tony Rutter, the TT2 Italian Jnr Championship with Massimo Broccoli, and Italian Endurance Championship with Carlo Perugini & Fausto Ricci.

The example we offer for sale is a replica originally built by Two Wheel Classics in Warrington UK. On arrival the build quality and finishing detail left a lot to be desired and before it turned a wheel on Oz soil it was completely rebuilt by RaiderMoto and made street legal – this bike is suitable for immediate road use under club or conventional full registration.

More than 130 hours went into making this a seriously fun bike to ride. Amazing power to weight ratio, a wide and linear torque curve, and super braking capability makes this a genuine giant killer.

This bike could not be built for the asking price. Two Wheel Classic sell rolling frames from around $20AUD, so by the time you buy a donor bike or engine, then build the finished bike to an equal standard you will have spent in the region of 38-40kAUD.