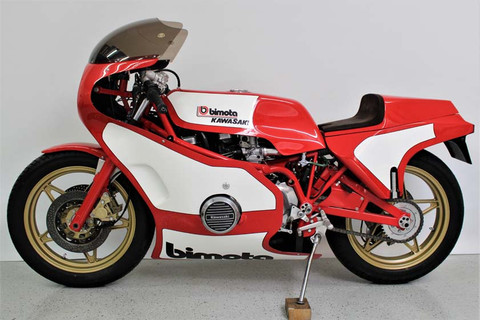 For those not aware of the Bimota story, the tiny company was founded in 1973, in the Italian beach-side resort town of Rimini. The original owners were Valerio Bianchi, Giuseppe Morri, and legendary Massimo Tamburini. The company name is a portmanteau derived from the first two letters of each of the three founders' surnames, Bi-anchi Mo-rri Ta-mburini.

Created from the era when the Japanese manufacturers built powerful engines, but abysmal frames, Bimota rose to fame by designing and building models that were capable of harnessing the mighty Jap engines power, and went about demoralising Japanese factory teams on race tracks around the world.  During the late 1970s, Bimota also helped develop and build motorcycles branded as Lamborghinis, and in the 1980s they also customised Yamaha and Ducati motorcycles.

Bimota's co-founder and long-time chief designer Massimo Tamburini, has been an influential player in the development of other Italian brands, most significantly his work on the popular Ducati 916, the Ducati Paso, and the MV Agusta F4; other designers such as current Bimota chief Sergio Robbiano have also been involved with larger-volume manufacturers.

Up until recent, Bimota models in production included the DB5, DB6, DB7, DB8, DB9, DB10 and the Tesi, The latest model features the Tesi 3D which along with the co-designed Vyrus is said to be the only bike on production to house Hub Steering.

Of all the specialist frame builders i.e., Egli, Harris, Spondon et al, Bimota is by far the most successful and longest lasting. Unfortunately in 2017 the storey has finally ended with Bimota closing its doors for good.

In the 80’s, the most successful Bimota was the legendary KB1, a model that saw the tiny company become recognised as a genuine manufacturer of exclusive, quality motorcycles. The KB1 was Bimota’s greatest commercial success, both on and off the track, and was powered by Kawasaki’s famous KZ1000 engine; the KB1 set the standard for sports-bikes.

Ownership history of this bike is known and recorded back to the original UK purchaser. A total of 6 previous owners up until September 2007, when the present owner imported it and over the years had the bike returned to its original factory specification.

This is a matching numbers bike, meaning frame & engine numbers are matching thereby guaranteeing the engine is the original unit fitted in 1980. As you will see through the pics, all components are stamped with the Bimota logo, including a NOS original rear sprocket.

A truly rare and beautiful example of one of Tamburini’s greatest creations of the era. Only 728 KB1’s were ever built and most have not survived, let alone are found in this museum quality condition.

A selection of high res pictures can be viewed by clicking the link below.

A huge selection of high res pictures of the restoration can be viewed on the link below.