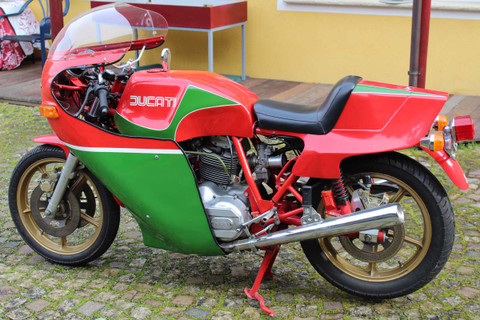 The Ducati MHR model was created to celebrate Mike Hailwood’s spectacular victory at the 1978 Isle of Man F1 race. Released at the 1979 Earl’s Court Motor Show, the original model was branded ‘900 Replica’. Initially the factory announced only 200 limited edition 900 Replica’s would be built, but it is thought by many that around 300 were produced in 1979.   It was only from 1981 onwards that the model was officially titled ‘Mike Hailwood Replica’.

It’s believed around the first 100 were produced with fibreglass tanks, then removed due to a last-minute awareness that fibreglass tanks were illegal un the UK. These first bikes received black steel 900SS tanks covered with a fibreglass shell of the original 900 Replica shape. The 900 Replica engine was identical to that of the 900 SS and came with 40mm Dell’Orto carburetors and Conti exhaust mufflers.

This particular example is build number 209 of the first 1979 production, and presents in lovely unrestored condition although the fairing has been repainted at some time in the past. It has the original registration docs and German papers. The bike has just undergone a full service, including valve clearance checks, new tyres and on German registration.  Located with our German agent, the advertised price is well below market price for a first edition and includes shipping & arrival costs into Sydney.