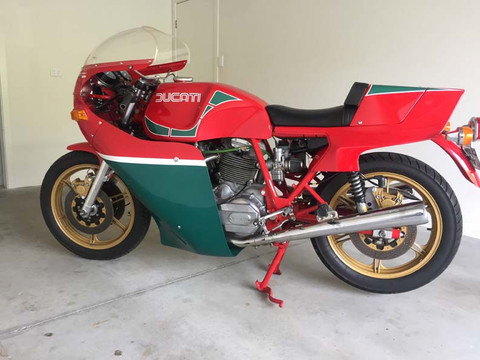 The Entire Ducati MHR model was created to celebrate Mike Hailwood’s spectacular victory at the 1978 Isle of Man F1 race. Released at the 1979 Earl’s Court Motor Show, the original model was branded ‘900 Replica’, and it was only from 1981 onwards that the model was officially titled ‘Mike Hailwood Replica’.

Whilst opinions vary over the first batch numbers, it is believed by many that only 300 1979 models were produced, although initially the factory announced only 200 limited edition 900 Replica’s would be built. It is also believed that the first batch were produced with fibreglass fuel tanks, which was changed to a fibreglass replica cover over a regular 900 SS metal tank, due to a last minute discovery that fibreglass fuel tanks were illegal in the UK.  The first models also used a single seat and came with a certificate of authenticity. The engine was identical to that of the 900 SS and came with 40mm Dell’Orto carburetors and Conti exhaust mufflers.

This particular example is a replica of the highly sought-after 1979 model, built from a genuine 1981 Mike Hailwood Replica 900. As the photos detail, the bike is offered in concourse condition and is somewhere in the region of $10k under the build price.