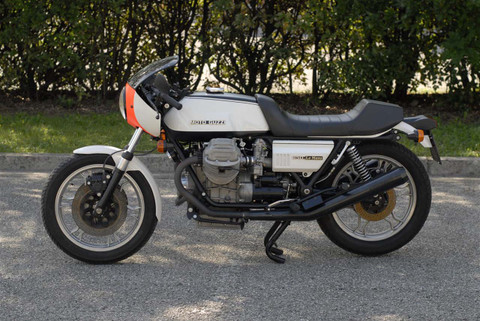 The Mk I Le Mans never really existed. What we call the Mk I was actually the '850 café racer', first displayed to the world at the 1975 Milan motorcycle show, with sales beginning in 1976. Like the 750S and the 750 S3, the Le Mans 850 was developed from the V7 Sport of 1971, but power was significantly increased from 53hp up to 71hp at the rear wheel. With a top speed of 130 mph, the 850 Café Racer was a huge jump from Guzzi’s T3 thanks to higher-compression domed pistons, larger engine valves, and Dell'Orto 36 mm pumper carbs with filterless velocity stacks.

Today known as the Mk I, the landmark model had two production runs with slight modifications. The first run, Series 1, had round CEV taillights and continued until at least September 1976, but fewer than 2,000 of these were made. The Series 2 run totalled some 4,000 bikes and are recognisable by the De Tomaso-designed rectangular taillight, a modified rear mudguard, black fork sliders and a more generous dual seat. The seat was a one-piece item of injection-moulded foam.

Most Le Mans 850 bikes were red and black, but a few were metallic blue (Ice Blue), and even fewer were white, making this 1977 example extremely rare.

Described by renown author Ian Fallon as "One of the great sporting motorcycles of the 70's, the Le Mans was a masterpiece!"

Beautifully restored and travelled a fraction over 44k k’s, this spectacular Mk I is located with our Italian agent. The advertised price includes shipping and arrival charges into Sydney.