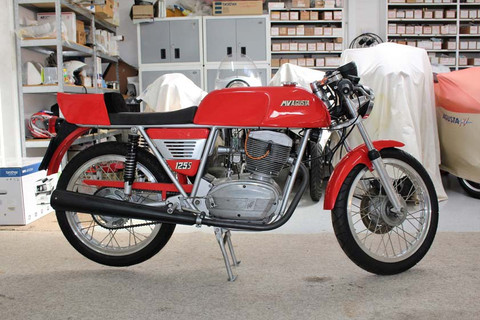 Count Vincenzo and Domenico Agusta had a passion for motorcycle racing, and much like Enzo Ferrari, they produced and sold motorcycles almost exclusively to fund their racing efforts. A no expense spared dedication to have the best Grand Prix motorcycle racing team in the world paid dividends and won the company more world titles than any other.

The first 125cc production roadster - the Gran Turismo - appeared in 1954 with single-cylinder overhead-valve engine, a format MV's 125 would retain until the end of production in 1977/78. In 1975 MV redesigned the little single and created what many believe is the most beautiful single MV ever produced, the 125 Sport. It became an instant hit and surely one of the most attractive four-stroke singles ever made. An alloy cylinder barrel and electronic ignition were features of the fashionably styled engine, which produced 14bhp at 8,500rpm, good enough for a top speed of around 75mph. The unit was housed in a very neat, silver finished, duplex cradle frame equipped with Ceriani forks and Scarab front disc brake.  A full fairing was an optional extra.

Very few Sports have ever made it to Australia; this very original example was purchased in 2013 from Belgium and since arrival has been part of an extensive Italian collection in Victoria. It has been serviced and runs perfectly. Presently in the UK & EU, these little jewels command values in the region of 10,000GBP, making this example exceptional value.