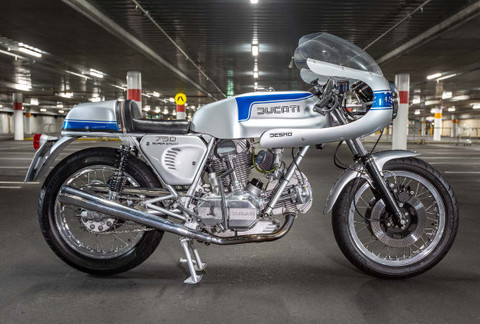 The 1975 Ducati 750 Super Sport is considered the closest in specification and second in desirability to the legendary 1974 750 Super Sport, or Greenframe as they’re better known. True bevel enthusiasts acknowledge the significance of the 75 versions (750 & 900) as only they and the 1973/4 Greenframe were built faithfully to Taglioni’s original design & race-specification, completely without compromise or dilution to the fast approaching environmental controls that would begin to soften the SS range in years to follow. Most importantly, whilst 401 Greenframes were constructed, only 249 of the beautiful 1975 750 SS’s would ever roll out the Borgo Panigale doors.

This particular example is one of the circa 100 Australian delivered versions and has excellent provenance. First known owner of this bike was Sydney based racer Darryl Hume who, like the majority of 75 750 & 900 SS owners, bought their bikes for racing purposes.  After Darryl's ownership the SS passed to Paul Balukoff who in-turn sold it to Simon McCluskey (not 100% with spelling of Simon’s surname) around 2002.

Under Simon’s ownership the bike underwent a long and very detailed restoration and return to oem road condition. This was very much a no-expense spared project with much of the work was carried-out by Mike Soderland (Gowanloch Ducati). Once completed the bike saw very little use through Simon’s ownership and in September 2008 it was placed on display/consignment at the Classic Throttle Shop, which is located at 50-64 Pacific Hwy, North Sydney.

After a month of negotiation, the current owner flew into Sydney, paid-for and collected his prize on 19 October 2008, and the next day set about his long ride back to Tasmania. First stop was a visit to the Australian Godfather of Bevels, world renowned Ducati aficionado Ian Gowanloch. A photo from that day with Ian & his daughter alongside the bike can be seen in the image collection.

The bike finally reached Tasmania on 23 October 2008, where it has resided to present. At the time of purchase the bike showed 4,573km on the odometer, and today that has risen to only 14,700km’s, reflecting the bikes annual average of approximately 1,000k’s per year use. This bike has been loved and well cared for during it’s post restoration life, with all servicing and maintenance performed by well known & respected Bevel enthusiast and racer, Pat Haar. The bike is kept in perfect condition and has perfect patina for its use and age. Although sparingly, it does see regular use as its creator envisaged, with spirited rides through some of Australia’s best bike roads.

This bike is well known by enthusiasts of the Apple Isle, with it being a regular feature in shows and promotional outings such as Historic Car & Bike events across Tasmania, the Hobart Italian Street Festival, and most recently the National Historic Road Race meeting at Symmons Plains.

Included with the sale is its Tasmanian Historic Registry Log Book, in which is a chronological record of all journey’s undertaken, as well as servicing and repairs performed since the 2008 purchase. Also included is the original 2008 purchase contract and NSW RTA Permit used to ride it from Sydney to Tasmania, a CD Rom containing all the original promotional images when held on display at the Classic Throttle Shop.

Important: Keen viewers of the images will note the original Duplo head-light is not present, but do not fear, as noted in the images this precious item was removed many years ago and is safely packaged. It will of course accompany the bike at the point of sale, as might the original Owner’s Manual, subject to final sale price.

Click on the link below to view Hi-Res imagery of this spectacular 750SS.