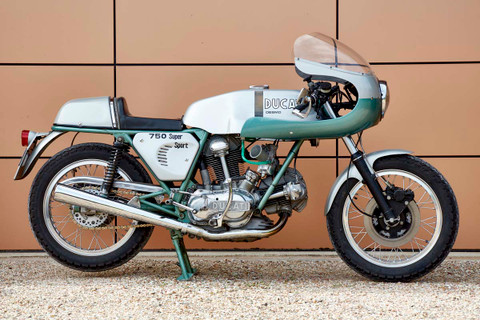 Only 401 examples of the very first Ducati Supersport were ever built in January, 1974. Better known as the ‘Greenframe”, today these are easily the world’s most desired vintage Ducati and sought-after world-wide by collectors and motorcycling enthusiasts alike.

The example being offered here is in original unmolested condition and has had only 3 previous owners. The names of all owners are known and are recorded with other documentation. This SS one of only 18 delivered new in Japan by the official Ducati distributor, Murayama Motors Japan. The first owner of this bike was founder of the world renown Power-House Motor Club Japan, a name synonymous with ownership of some of the world’s most exotic Bevel & Belt Ducati race bikes. The bike was sold another two times in Japan prior to the end of the 1970's, although the third owner never rode the bike, preferring to have it as an office display up until the present owner, an Australian, acquired it while living in Japan.

The present owner also had the bike as a static display up until 2012/13 when it was delivered to renown Japanese bevel specialist, Motoshop Imoto Hiroshima, to check over and recommission. Besides the normal service & fluids, it was decided to remove the heads for inspection; the valves were lapped and clearance shims set but otherwise untouched as everything was found in perfect condition. Following this work the bike was ridden sparingly before being exported to Australia.

Once here the original fuel tank was removed and replaced with a modern reproduction unit, and the wheels were removed to retain the bike’s original Metzler C7 tyres and correct 4777 wheels in perfect original condition. The original tank, wheels and tyres are included with the sale as are the reproduction tank, 4777's and Dunlop TT100GP tyres presently fitted to the bike.

The original Scarab callipers have received new pistons and seals, while the front Scarab master cylinder has been rebuilt and sleeved to take 15mm Brembo piston giving much better feel & performance. The rear Lockheed master cylinder and calliper have also been rebuilt, and while the fitted front brake hoses are braided, the original correct Scarab rubber lines and fittings are included.

Carburettors are the correct early smooth-body with hand-stampings which have undergone ultra-sonic cleaning and fitted with new needles, jets, idle screws and emulsion tubes. To improving riding pleasure the original point ignition was replaced with Dyna electronic pick-up & and coils, but no changes whatsoever were made to the frame and the original ignition system with NOS original points, condensers and coils are included.

The engine still retains its lead seal, and the number stamping has the number 5 restamped. It is very obvious by the positioning of the stamp that this is factory original and simply a second impression was performed over the first that was too light a depression. Robert Miller (owner of the bevel registry) has performed a visual inspection of the engine stamping and concedes this looks completely innocent and genuine.

Click on the link below to see hi-res images of this bike.