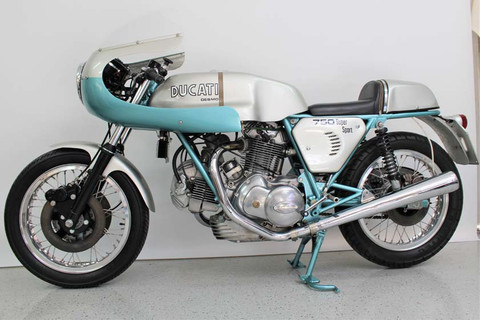 In the world of collectible motorcycles, no manufacturer can equal the broad-based desire of Ducati. If a list was compiled of every bike in every collection around the globe, it would come as no surprise to see Ducati as the most dominate marque, and there is no model more sought-after than the 1974 750 Supersport, better known as the Greenframe.

Whilst there are many other bikes that are far rarer, and command much higher values, the Greenframe has become the ultimate trophy – no collection is considered complete if there is a Greenframe missing. The world’s obsession with Greenframes has driven their values beyond the reach of most enthusiasts and planted them firmly into the world of Van Gogh, Monet, and other examples of irreplaceable collectibles; owners of Greenframes are but Custodians.

Sadly many Greenframes are hidden away like pieces of valuable art, but for the true enthusiast, owning an asset that has out-performed almost every form of investment on earth runs a distant second place to the joy and exhilaration of riding one through the hills and byways – there is no other sound like that of bevel Ducati.

This particular example was sold by Raidermoto.com in 2011 and although started regularly and ridden sparingly, it has predominantly sat in a motorcycle museum in far north Queensland.

The bike’s history is known back to 1977, when it was owned by a Rex Neal of Bayswater WA up until 1998, when it was sold to a Warren Crittle of Wellington NSW. It was stored from 1998 until 2005 and then purchased by a regular client of ours, Stephen McFarlane. Over the following two year it was restored and ridden regularly until we sold it to the present owner in 2011.

The bike is sold with a comprehensive file of documents and receipts, including references to the engine being examined in 1978 when it received a new factory supplied big-end assembly, and it has travelled only 16,000 since that overhaul. During the 05/06 restoration all bolts, nuts and spokes were replaced with stainless steel variants, it also received a new steering lock and is fitted with a NOS oil cooler from the factory racing kit. Arthur Davis of Desmo HQ (Byron Bay) stripped the engine and gave the entire motor & gearbox a refresh; invoices are on hand for that work.

The previous owner registered the bike in NSW for approximately one year and did circa 6000km. At the time of selling in 2011 it had travelled only 23,482k’s, and today it has only 23,519k’s on the odometer. The previous owner changed the oil every 1000kms, but given it has done less than 40k’s since 2011 the bike will undergo a full service and carby synchronised before selling.