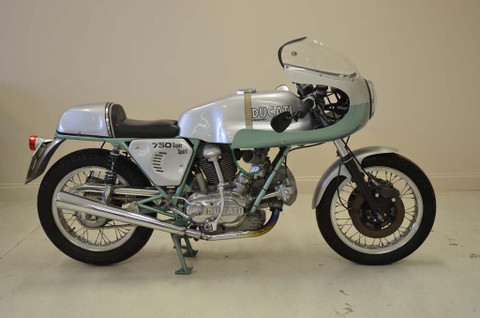 The 1974 750SS Greenframe needs no introduction; easily the most sought after and expensive of all Bevels, these bikes have never decreased in value and never will. This particular bike has been verified by Ian Falloon, with the respected author having inspected the bike in the USA in the early 2000’s. The frame & engine number are retained on both the bevel register and Ian Falloon’s personal bevel register.

Ownership of this bike is known and recorded from its arrival into Australia. As the photos detail, this bike has original patina but nonetheless will soon undergo a full and complete restoration, including engine and gearbox. Prior to purchasing the cylinder barrels were removed to verify the internals as being correct, and photos of the engine are on file. The engine was reassembled and runs perfectly, as can be seen in the attached video clip taken late 2013. Since this recording the bike has not been ridden.

The bike can be purchased in as-is condition prior to commencement of the restoration, and interested parties should contact Raider Moto for further discussion. Parties interested in claiming this bike post completion can place a deposit to ensure the bike is removed from market.