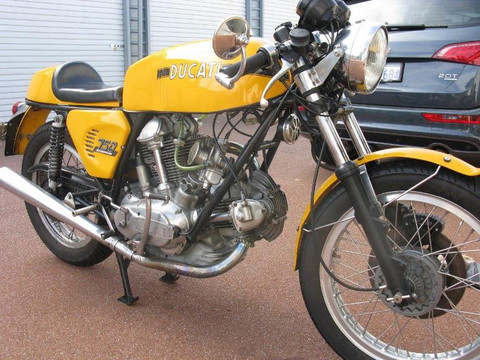 The owner of this bike has supplied the following description and comments;

From new this bike was acquired by an American motorcycle museum and never ridden. In 1988 it was sold to a Morris McCormick of Tennessee, who used the bike up until 2010 after which it was purchased by The Australian Motorcycle Museum in Hayslea, QLD, Australia. The owner of the museum, Allen Smith, held the US title for the bike and it arrived into Australia with only 8,674 Mls use. The current owner purchased the bike from Allen Smith and holds the import approval and Certificate of Title, the original Title number is also listed on the Tennessee Title document.

When purchased the bike's tyres were rock hard and split around the sidewalls, indicative of many years if inactivity sitting on display in museums. This bike is completely unmolested and still retains the original factory tool-kit, an item rarely found with bikes of this age. After purchasing from Qld the bike had a thorough inspection and service by a Ducati specialist, and the same specialist mechanic has serviced the bike to date. The carburettors received overhaul kits and new atomisers installed as the rubbers had perished; nothing else was required and the bike has run perfectly ever since. The wiring is original and as such there is potential for the all too common electrical failures associated with aged connectors & wiring joints; a new loom was acquired but not fitted as yet. (loom include in the sale).

This bike is patina perfect.