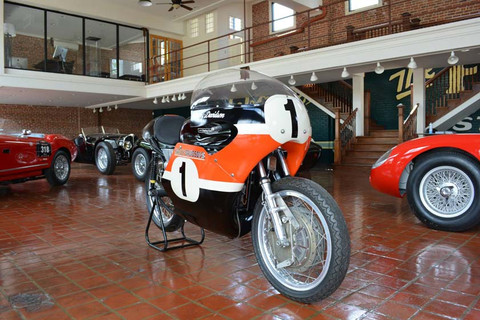 The Harley-Davidson XRTT is almost certainly the most beautiful motorcycle ever to roll out of Harley’s Milwaukee factor.  It was fitted with the legendary XR750 engine, the power plant which dominated US flat-track circuits. The plan behind the RXTT was to regain the marques AMA prominence it enjoyed from 1954 through to the late 60’s, after which British bikes & riders ruled the roost. From 67 through to 71 Harley won only one title, the rest shared between Triumph & BSA.

In 72 Harley debuted the XRTT in the hands of Factory racer Mark Brelsford. He rode in 15 dirt-track races, winning three and finishing in the top five 11 times. By the end of the year Brelsford won the Grand National Championship over a rookie by the name of Gary Scott. In the 27 seasons since then, alloy XR engines have powered championship-winning motorcycles 20 times, leaving only seven titles for the rest of the world.  The XRTT engine was so good that should you venture to a Grand National Dirt Track Series race today, chances are the winner will be riding an XR Harley.

This example is in concourse condition and currently located in the USA.