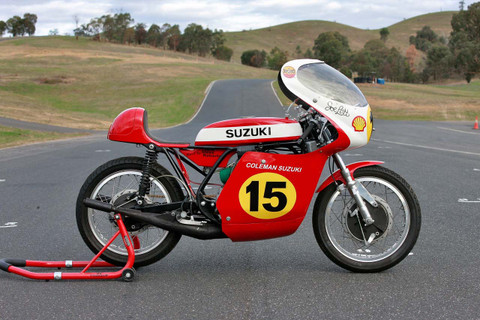 Raidermoto is incredibly humbled to offer a unique opportunity for serious collectors of motorcycle racing history.

Cal Rayborn, the quick Californian, was one of the most influential racers of 60’s/70’s motorcycle racing.

Born in San Diego in 1940, Cal Rayborn first rode a motorcycle when he was eight. In his teens he worked as a delivery boy after school, and over the summer holidays his time was consumed with riding motorcycles.

In his early 20’s he turned to scrambles and TT Steeplechase, then tried his hand at road racing, beating many of California’s top riders on what was a production motorcycle. He turned pro in 1965, recording two podium finishes – a second at the Des Moines road race in Iowa, and third at LA’s Ascot Park half-mile. In only his second year as a pro, Cal won his first AMA road race at San Diego’s Carlsbad circuit.

An almost over-night sensation, legendary Harley-Davidson race boss Dick O’Brien was one of the first to recognise Rayborn’s natural raw speed, and promptly signed him to the Milwaukee squad. Although contracted to ride Harley’s 750 dirt-trackers and road racers, O’Brien allowed Rayborn to compete for his good friend and mentor, Don Vesco, in both 250 & 350 classes riding Veco’s Kawasaki and Yamaha two-strokes. During this period Rayborn went up against the famous Kel Carruthers in the AMA Junior class.

In various articles, Vesco made note of Rayborn’s rare talent for amazing corner entry speed, now the staple technique for elite riders up to and including Marc Márquez.

Vesco remembers, “those Harleys were heavy and didn’t have the greatest brakes, and Calvin would run the thing into turns faster than anyone else, then he’d turn-in the front tyre to scrub-off speed. That’s not all that uncommon now, but in those days no one rode that way.”

Rayborn’s first big win for H-D came at the 1968 Daytona 200. Up against reigning world champion Phil Read, Rayborn out-braked the British rider’s much lighter Yamaha TD3 into the Horseshoe and was never headed again. The following year he proved to the world it was no fluke, by towelling the field for back-to-back wins.

In 1972, Rayborn made a dynamic debut in the UK, winning three of the six race John Player Transatlantic Series held over the Easter long weekend. Local Ray Pickrell (Triumph 750) won the other three, the pair finishing 1-2 in all six legs. It was England’s first viewing of a top American rider, and local fans voted Cal ‘Man of the Series’ Later that year Rayborn won road races at Indianapolis and Laguna Seca, which were his last AMA victories.

Rayborn’s UK success motivated him to take on the best road racer of 1972, Jarno Saarinen, at Mallory Park’s Race of the Year, held in September. Cal knew after practice that his heavy Harley was no match for Saarinen’s new water-cooled Yamaha 350, but he stayed with the Finn in the opening laps of the race, skidding into the corners as usual until ignition failure forced him out.

When Rayborn learned that Giacomo Agostini had signed with Yamaha and would contest the 1974 Daytona 200 on the new TZ750A, the American said, “Boy, I better get me a quick bike for that one!” Knowing he stood little chance with a Harley, Rayborn resigned from the Milwaukee team and signed with Suzuki America to partner legend Paul Smart. Eager to show-off his new recruit, Suzuki’s Ron Grant talked Rayborn into competing in the inaugural round of the Marlboro Series in New Zealand. Rayborn, having decided to follow in the footsteps of Mike Hailwood and John Surtees, had acquired a Lola Formula 5000 open-wheeler that he entered in the 1974 Tasman Series, so it made perfect sense to compete in the Marlboro Series while in NZ.

First round of the ’74 Tasman F5000 series was at Levin, north of Auckland, a week after the second round of the inaugural Marlboro bike series at Pukekohe. Rayborn arrived in NZ and was offered $1000 start money to race a three-year-old Suzuki TR500. Heavier, less powerful and not as nimble as the new TZ350, Rayborns team decided to convert it to Methanol the morning of the event. Understandably the bike seized in practice; new pistons were fitted and possibly more tuning, and Rayborn went out in the first race. Running 4th at the end of lap one, tipping into Champions Curve (end of the main straight), a very fast right hander, the bike seized again, throwing Rayborn off and into the hardwood timber guardrail at 190km/h. With so much still to do in his life, Calvin Lee Rayborn II was fatally injured; his family and the sporting world in large was robbed of one of the most impressive racers of the times.

The bike Cal rode was initially built for Geoff Perry, an up-coming young NZ champion who had made quite an impression in the 72 Dayton riding a "factory style" TR500 Suzuki. This was a bike built by Steve Roberts. Legend has it Perry broke a chain on the last lap while in the lead! Following this impressive start Steve Roberts built a new & improved chassis for Perry for the 73 Daytona assault. This new design was based on a smaller, lighter frame modelled on the TR250, with an engine built by Dick Lawton. Tragically, Geoff was killed before the 73 Daytona.

The bike then went on to be campaigned by Dayle Wylie & Brian Martin, and sometime during 1973 was purchased and raced by Joe Lett, the workshop manager at Coleman Suzuki in Wanganui; all these guys were among NZs finest riders.

This is a very unique opportunity to purchase this famous piece of motorcycle racing history and is presented in concourse condition. Located in Australia, Raidermoto can co-ordinate & manage freight worldwide.

Follow this link for hi-res pics of this amazing motorcycle being ridden by Sir Alan Cathcart.