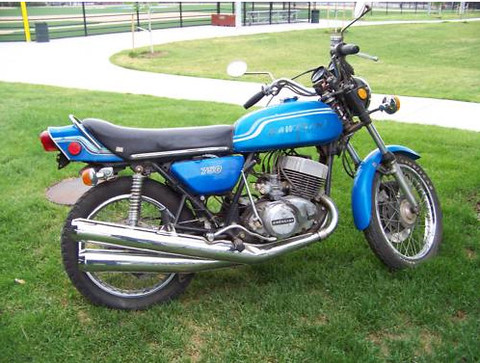 Taking into consideration our Nanny-state mentality and environazism, to ride a 750 H2 today you’d be excused for thinking this bike was from another planet; it’s without doubt from a different time. Fast, loud, smoky, vibratory, thirsty and evil-handling, the H2 and its predecessor the Mach IV were outrageously anti-social even by the somewhat lax standards of the early Seventies. The opening paragraph of Kawasaki’s brochure left little doubt as to their intentions in building the H2!

“The Kawasaki 750 Mach IV has only one purpose in life: to give you the most exciting and exhilarating performance. It's so quick it demands the razor-sharp reactions of an experienced rider. It's a machine you must take seriously.'

They weren't joking; the original air-cooled 748cc motor put out 74bhp and propelled the H2 to over 195kph in stock form!! Light weight and a short wheelbase meant fearsome acceleration and plenty of wheelies, but it also gave it the internationally recognised nickname of “The Widow Maker”, for the triple's handling was even more notorious than its engine performance and many a pilot never returned to base after a spirited ride.

This particular example is one of the very early production models with the far more aggressive cylinder inlet port design. After the first few hit the streets it became clear that most riders were unable to control the power, which literally came in like a light-switch as rpm lifted and the engine entered its power-band; it was almost uncontrollable and plenty of early H2’s ended up in wrecking yards before their first refuel! In response Kawasaki raised the port roof to lessen the effect, and slow-down the rate at which the neck-breaking power was introduced.

This bike was purchased by a US Marine stationed in Japan. In time ownership passed to the Marine’s son; we bought it in the condition seen here in these pics. Completely patina perfect with a fraction over 11,000 genuine miles. Unfortunately with no Title we were forced to have it dismantled for shipping, and that is how it is offered for sale. It is 100% complete and still packaged in boxes and cling-wrap. It would make an excellent restoration project.