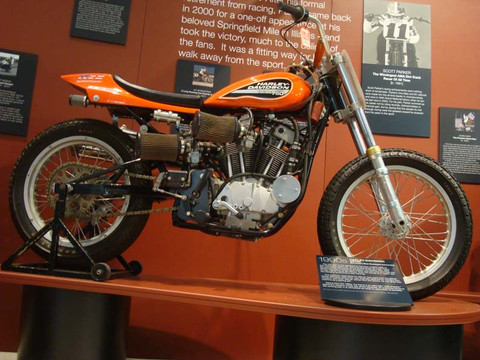 Harley-Davidson first released the XR750 1970, primarily for dirt track racing, but also for road racing in the XRTT variant. The XR-750 was designed in response to a 1969 change in AMA Grand National Championship rules that allowed other manufacturers to compete, and subsequently beat, the all American marque. With National pride at stake, the outdated KR was replaced with the XR750, a bike that would become the winningest race bike in the history of American Motorcyclist Association racing.

The XR-750 produced many Champions like Mark Brelsford, Cal Rayborn, and Jay Springsteen, and was the favourite motorcycle of the World’s most famous stunt performer, Evel Knievel. An XR-750 was included in the 1998 The Art of the Motorcycle exhibition, and one of Knievel's bikes is in the Smithsonian's National Museum of American History, America on the Move exhibit.

The bike presented here for sale is currently on display in the AMA Motorcycle Hall of Fame Museum, Pickerington, Ohio. It is in concourse condition and ready to ship world-wide.