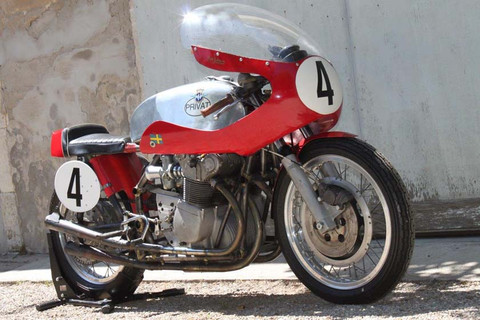 After the 1957 Grand Prix season the Italian manufacturers Gilera, Moto Guzzi and Mondial, jointly agreed to withdraw from Grand Prix competition due to escalating costs and diminishing sales. Count Agusta originally agreed to withdraw, but then had second thoughts. Rather than winding back his spending MV Agusta ramped up development of the 500cc engine and duly went on to dominate Grand Prix racing, winning 17 consecutive 500 cc world championships.

Count Agusta's competitive nature saw him hire some of the best riders of the time, namely Carlo Ubbiali, John Surtees, Mike Hailwood, Giacomo Agostini, Phil Read, among others. The best riders required the best engineers, most notably Arturo Magni, and together MV’s three and four cylinder Gp bikes were known for their excellent road handling. The fire-engine red racing machines became a hallmark of Grand Prix racing in the 1960s and early 1970s.

This bike is the first ever, and possibly only ever, private customer MV4 Gp race bike sold by the factory team. It starts and rides absolutely perfect, has been fully serviced and ready for any historic event or to be placed on display.   The last outing for this bike was in the 1997 Isle of Man Classic TT.  Anyone who was at this event will remember the unforgettable sounds of this engine bellowing out from its open exhausts. Pics attached show it carrying # 37 on the fairing, air-born at Ballaugh Bridge.

This 500 MV4 is a perfectly preserved and has never been restored. This is no replica, this is a genuine and very historic racing bike, a well-known part of the MV Agusta 4 cylinder racing legend.

The advertised price in AUD and includes local and international shipping to any major port in the world. Price subject to exchange rate fluctuation.