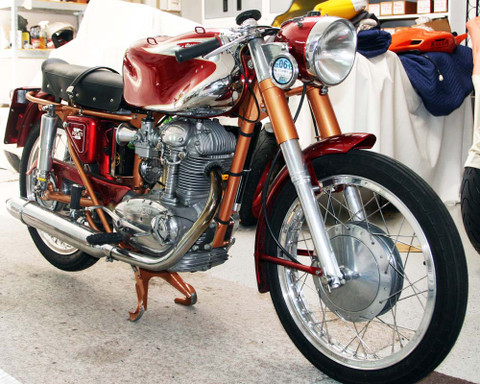 In 1959 Ducati revolutionised its model range with what was regarded as the most sophisticated bike of the time - the 200 Elite. Featuring all of the innovative technology introduced by Fabio Taglioni with the “Marianna“ and Ducati’s first single-cylinder racing bikes, the 200 Elite may well be considered as the company’s first ever Production Racer.

The 200cc engine made its debut in the Elite and owing to its success would go on to be the power-plant for Ducati’s Motocross, which in-turn became predecessor of the now famous 250 Scrambler. Regarded by all who rode her as being “utterly beautiful”, “exceptional handling”, the 200 Elite met with great success on international markets at a time when domestic sales were very sluggish. Thanks to its amazing success, the 200 Elite enjoyed a long life, and was eventually discontinued in early 1965.

Provenance of this truly spectacular example is beyond reproach. The bike is first recorded as belonging to one of England’s most famous automotive dealers, Kings Motors (Oxford) LTD (UK). Entering the King’s records on 7 September 1964, the bike was first sold to a Colin Carr Dickie on 30 September 1965, and then to Ronald Bell who retained the bike until his death in 1995. In 1966 it was purchased by Graham Boon who undertook a magnificent restoration, returning it to the spectacularly original condition you see in the photographs. At completion the bike was placed on top of a specially constructed cabinet within Mr Boons residence.

On arrival in Australia we have started the engine and it runs superbly.