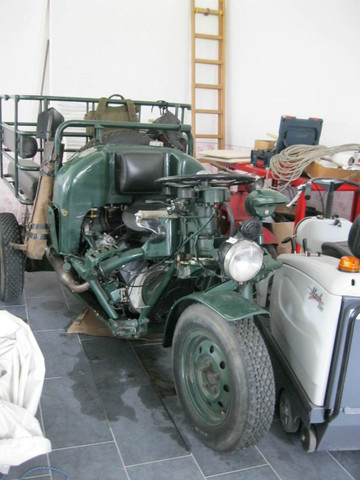 THIS MOTO GUZZI MULE WAS STOLEN 2 FEB 2018 FROM ITALY

The Moto Guzzi Mulo was originally designed and built in 1928, and appeared as the Typo 107. Designated Moto Guzzi Triporteurs (transport motorcycles) they were called "Moto Carri".

In the late fifties the Italian Ministry of Defence request Guzzi to develop a special vehicle for the "Alpini" (mountain troops). Up until this period the Alpini troops relied exclusively upon donkeys to transport supplies over the rugged mountain terrain. Officially called the Autoveicolo da Montagna 3 x 3, the vehicle was, and is still to this day, referred to as the Mulo. Specially designed to fit into narrow alpine passes and paths, the "Mulo Meccanico" (Mechanical Donkey) was a unique machine featuring all-wheel drive and variable wheelbase and track-widths.

The chassis consisted of tubes and pressed steel box sections, while the rear suspension consisted of two box girder arms that were cushioned by rubber suspension. Up front was a one-sided telescopic fork with coil springs while steering was perform via a complicated bevel gearing assembly. The driver sat on a motorcycle seat, but the operation was done through levers and pedals as in a car. The engine, sitting behind the driver, connected to manual gearbox with six forward gears and one reverse. There was a central differential with a teruglooppal to prevent roll back; 20% of the drive went to the front wheel, 80% to the rear wheels.

Despite incredible technological achievements, the Mulo was easily stopped by fallen trees and rocks, a common happening in alpine areas. The Mulo was fabulous at climbing steep inclines, but due to its 3 wheels or driving tracks, the vehicle became hazardous when side-on to an incline, and many simply rolled down the mountains. By comparison, the reliability of Donkeys were seen superior and the Mulo, or Autoveicolo da Montagna, was taken from production by 1963. Approximately 200 Mulo’s were ever produced.