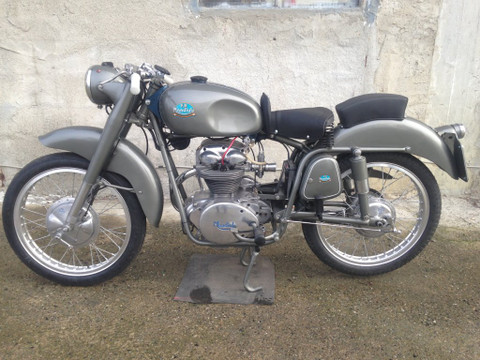 Mondial is by far one of the greatest names in the history of Italian motorcycles, and in our opinion, seldom receives the respect and admiration it so richly deserves. Based in Bologna, FB-Mondial ran from 1948 till 1979, but is mostly known for their Grand Prix racing success of the 1950’s during which it won 5 World Championships, and ushered in a plethora of advent-garde designs and revolutionary technology. Long before Ducati, Mondial had designed and built a bike with desmodromic valve actuation, but alas it did not go into production.

The "F.B." in Mondial represented "Fratelli Boselli", a noble family from Milan. During a time when MV Agusta and Ducati produced economy lightweight two-stroke motorcycles, mopeds and scooters, Mondial produced high-quality 2 & 4-stroke sporting motorcycles. The Mondial factory in Milan was much smaller than its larger competitors, Moto Guzzi, Gilera or Benelli, and was more of a "boutique" manufacturer, specializing in high-performance, small-displacement motorcycles. Much of the production was done by hand, which kept output to between 1,000 and 2,000 units per year.

Such was the respect and dominance of Mondial that in 1949 MV Agusta purchased a Mondial which they used as the blueprint for the famous marque’s new 4-stroke motorcycle. In the face of rising costs and a reduction in sales, the entire Italian motorcycle industry collectively decided to end Grand Prix racing at the end of the 1957 championship, and all followed-through with the agreement except MV, who saw it as an opportunity to win, and they did with little or no real competition from Mondial who was so dominate in the years preceding MV’s entry into Grand Prix racing.

This particular Mondial 200 has been beautifully restored and has matching numbers. Presently with our Italian agent the advertised excludes shipping & arrival costs.

Advertised price may include shipping concessions and/or be subject to currency exchange rate fluctuation – please contact RaiderMoto.com to confirm the location of this item and establish the price relative to the current exchange-rate.