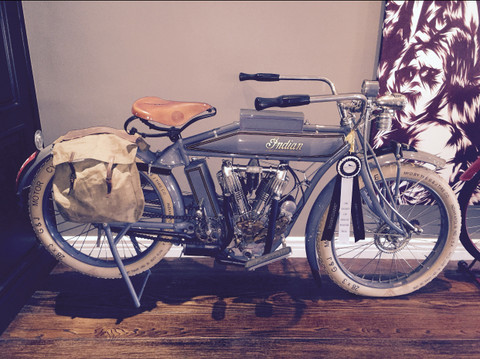 Hendee Manufacturing was at a highpoint of their history at the end of 1913. They had become the greatest motorcycle company in the world. They possessed the best technology and the largest capacity to manufacture two-wheeled motor vehicles. Their machines began with relatively small displacement single cylinder engines in lightweight diamond frames, to quickly evolve into industry setting engine displacements using advanced engineering and novel frame developments. They were solid, dependable transportation on the road and all-conquering on the competition circuits around the world.

Despite their success Indian unveiled their astounding Hendee Special, the first motorcycle with full electrics including electric start. However the Indian was far superior to the current battery technology of the period and the endeavour became an expensive failure to the company. Hendee had to fall back on its standard roadsters of the 61 cubic inch V-twin that was available to the motorcycle enthusiast from 1914 onward. Growing competition from the mid-west upstart, Harley-Davidson and also from Henry Ford’s Model T that just began to lower the cost of a car through the effective use of the moving assembly line, would begin to carve into Indian’s world. Production would fall from a high of 32,000 motorcycles the year before to 25,000 that following year.

Indian manufactured a 4 horsepower single in 1913 but their bread and butter machine was this 7 horsepower 61 cubic inch twin that was available in several variants. This motorcycle was the two-speed model without electrics and sold for $275. The same Hedstrom engine powered all the models, and featured heavier inlet valve rocker arms and heavier valve domes. The two-speed transmission worked through a hand change situated on the right side of the gas tank, something that would remain with Indians until their last days. Hand controls included a left hand throttle and a right hand spark advance, both using Indian’s double link control with mechanical linkage. The engine sat low in Indian’s loop frame and road jars were uniquely quelled by their Spring Cradle Frame utilizing leaf spring suspension in both the front and rear of the motorcycle.

This particular 1913 example has been beautifully restored to resemble those used by the medical core during in WW1. This spectacular bike is a concourse winner and presently on display in the owner’s American residence.  the advertised price includes shipping & taxes into Sydney. Export clearance, shipping and arrival can be performed by Raidermoto.com to any country or port.