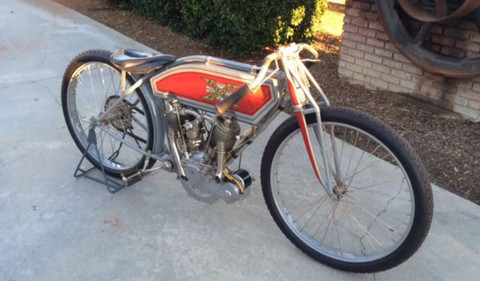 Ignaz Schwinn was an American success story. Born in 1860 in Baden, Germany, he began work as a machinist at the Kleyer bicycle works and gradually rose to factory manager and designer. In 1891 he emigrated to Chicago where he continued working in the bicycle trade. He was industrious and attracted the attention of a wealthy Chicago financier, Adolph Arnold, and the pair set out in business as Arnold, Schwinn & Co. Within a few years (1911), they were building 100,000 bicycles per year and fielded a team of bicycle racers to promote their brand. Schwinn was a wealthy man by 1911, and decided to add motorcycling to his portfolio, purchasing the struggling Excelsior Auto Cycle company.

Just as with his bicycles, Schwinn understood that racing success was the best form of advertising, and he backed special racing machines with professional riders, like Jake DeRosier, Charles Balke, and Don Johns. Schwinn’s limited production of racing specials were highly successful, reaching speeds in excess of 100 MPH in competition. The Excelsior Auto Cycle Co. had introduced a V-twin in 1910, with an F-head engine of 820cc and mechanical inlet valves, and a gear-driven magneto. The engine was enlarged to a full 61 cu-in. (1000cc) the following year. In 1912, Lee Humiston took his Excelsior V-twin to L.A.’s Playa del Mar board track, and became the first man in America to travel at 100 MPH.

In late 1915, Carl Goudy captured the 300-mile event at Chicago’s famous Speedway Park Board Track, averaging over 85 MPH. The ‘Big Valve X’ in its ‘short-coupled’ frame was a purpose-built track racer, and at least as fast as any machine built in the world at that time. Advertisements reminded potential buyers that the bike was ‘still the only motor that has ever attained a speed of 100 miles per hour under FAM sanction and recognition.’

This spectacular example is believed to have been formerly owned and raced by Russ Harmon, and later restored by the Harmon family. Presently on display in the owners American residence, export clearance, shipping and arrival can be performed by Raidermoto.com to any country or port.